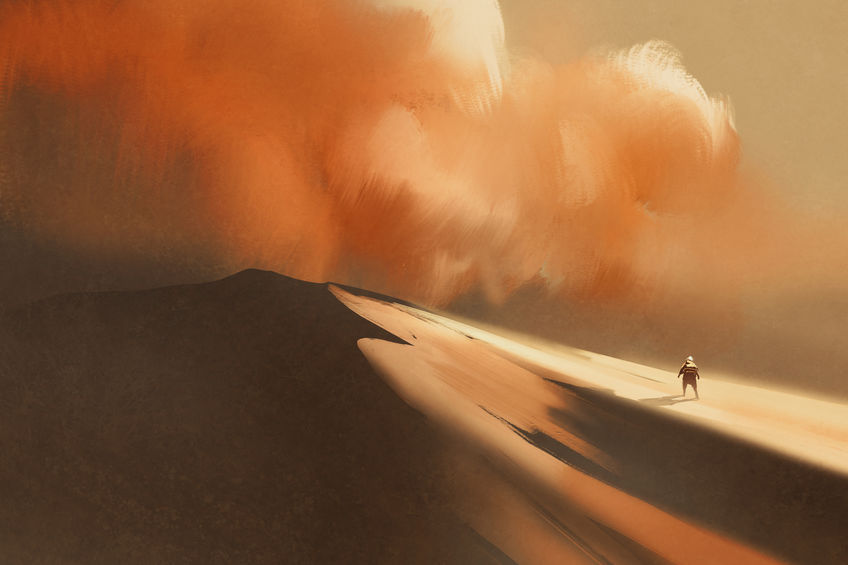 On June 16th, I had an encounter where I saw 7 giants being dethroned and thrust into the earth realm, just like the pattern Jesus described in the fall of satan.

And He said to them, “I saw Satan fall like lightning from heaven. Behold, I give you the authority to trample on serpents and scorpions, and over all the power of the enemy, and nothing shall by any means hurt you.”
-Luke 10:18-19, NKJV

As soon as these giants plummeted to the earth, I saw a huge dust storm and realized that they were kicking up dust, like a temper tantrum. I knew by the Spirit that each of the 7 giants had been assigned to one of the 7 continents, which, in turn was connected to a specific planet. (More on that later…)

When I had this experience, I knew nothing of the Saharan dust storm that was already headed our way and which tangibly and visibly manifested the following week. Apparently, the Saharan dust storm is a common meteorological phenomenon that sends dust from the Sahara Desert to the United States, the Caribbean, and South America. But the 2020 cloud, dubbed “Godzilla,” was one of the most intense on record, and scientists have no idea why it was so bad. To me, it was a physical confirmation of the validity of this encounter. As I was driving through downtown Jacksonville on one particularly dusty afternoon, what was happening in the spiritual realm became so clear…

The first thing to glean from this encounter is simply encouragement. For over 4 years, I have been hearing, “There is a changing of the guard.” I have seen a displacement happening in the realm of the Spirit, where ungodly principalities and powers are displaced and replaced by godly princes, in direct proportion to the ability of God’s sons to steward the earth under the headship of our Father. This encounter is an indicator that we are maturing and gaining the territory purchased for us by the precious blood of Christ. And, as a dear friend of mine said when I shared this encounter with him, “If we’re dealing with giants, we must be in our Promised Land!” So, be encouraged. His kingdom is advancing. Principalities and powers are “for Christ”  (Colossians 1:16). Just like the giants in the promised land occupied territory until the Israelites were able to steward it, so these beings occupy places in creation until the sons of God are truly ruling and reigning in His name, from heaven to earth.

Because the arising of God’s sons and the subsequent displacement of spiritual hierarchy cannot be stopped, these displaced beings are simply creating a dust storm of chaos and division in the earth. During this very tumultuous time, I have been shocked to see people I know, love and respect viciously attacking one another on social media. The same is true in literal war, when dust and smoke obscure vision, leading to the unnecessary casualties of “friendly fire.” So, for me, the second key to glean from this encounter is to remember that we are in a dust storm. Refuse to fire on your brother, no matter how clearly you think you see. Truly, we all “know in part.”

For now we see but a faint reflection of riddles and mysteries as though reflected in a mirror, but one day we will see face-to-face. My understanding is incomplete now, but one day I will understand everything, just as everything about me has been fully understood.
-I Corinthians 13:12, TPT

Remember that you must get above the earthly dust swirl in order to see clearly, so be diligent in turning your attention to the heavenly realm, where the real “you” is seated in Christ. Make decisions there. Receive strategies there, remembering that, down here, things are purposely confusing and obscured.

This dust storm will pass. But in the meantime, we must realize what is happening. We must know that it is a good thing. We must stay in peace. And, above all else, we must walk in love.

Until then, there are three things that remain: faith, hope, and love—yet love surpasses them all. So above all else, let love be the beautiful prize for which you run.
-I Corinthians 13:13, TPT