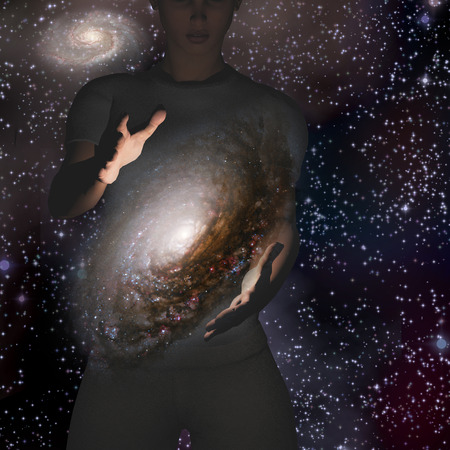 You are created in the image of God, a multidimensional being who creates just as He does. So… How does He create?

You are probably already aware that the Trinity (consisting of God the Father, God the Son and God the Holy Spirit) is both one Being as well as three. In Genesis 1, we clearly see that the three distinct persons of the Godhead collaborated as one in creation:

Then God said, “Let Us make man in Our image, according to Our likeness; let them have dominion over the fish of the sea, over the birds of the air, and over the cattle, over all the earth and over every creeping thing that creeps on the earth.” –Genesis 1:26, NKJV

A look at the first three verses of written Scripture reveals that Father, Son and Holy Spirit were in perfect agreement and in complete alignment, with each having a very specific and unique function that worked together seamlessly to create.

In the beginning God created the heavens and the earth. The earth was without form, and void; and darkness was on the face of the deep. And the Spirit of God was hovering over the face of the waters. Then God said, “Let there be light”; and there was light. –Genesis 1:1-3 NKJV

The word God in both of these passages is Strong’s #H430, the Hebrew word Elohim, which is plural.

The word “Spirit” is Strong’s #H7307, which is the feminine noun Ruach. It means:
1. Wind, breath, mind, spirit
2. Seat of emotion
3. Desire
4. A seat or organ of mental acts
5. Energy of life
6. Spirit of God, the third person of the triune God, the Holy Spirit, coequal, coeternal with the Father and the Son
7. Although Ruach manifests in the Shekinah glory, this word is never referred to as a depersonalized force.

Of course, we know that Yeshua is the Word, and we see from the following passage that He was the begotten of the Father. In other words, He was conceived or was first in the mind or thought of the Father.

Putting It All Together
When we read Genesis 1:1-3, putting all our definitions together, we see that Let there be light! was first in the mind of the Father as the seed. The Holy Spirit then brooded over that thought, giving it emotion and life energy. It then proceeded as the creative word from the mouth of the Son, becoming material substance. The Father thought it. The Spirit gave life to it. The Son said it: And there was light! This is the creative process of Elohim, the Trinity!

What This Means For You
Remember the word Elohim? That word is also defined as “rulers, judges, divine ones, angels or godlike ones.” Elohim first refers to Father, Son and Holy Spirit creating together in the beginning, but this same word can also be used of you when you create with Him, functioning out of your union with Him!

When the Pharisees accused Yeshua of blasphemy for saying that He and His Father were one, He responded by saying:

Isn’t it written in your Scriptures that God said, “You are gods?” The Scriptures cannot be denied or found to be in error. So, if those who have the message of the Scriptures are said to be “gods,” then why would you accuse me of blasphemy? –John 10:34-35, TPT

The word “god” here is the Greek word theos, but Jesus is quoting from Psalm 82:6, which, again, is the Hebrew word elohim. God (Elohim) operated individually and collectively to create. You, as His elohim, are created in His image. You are called to create with Him, according to the pattern He has established and demonstrated!

Since you are created in the image of God, you are a three-part being who corresponds to His triune nature. Your spirit corresponds to the Father, your soul to Holy Spirit and your words and body to THE Word, who wrapped Himself in human flesh and lived among us. God demonstrated for us that the agreement of thought, emotion and word creates. Everything is created by this pattern, whether we realize it or not. The Father reveals His thoughts to us. The Spirit broods over those thoughts, making them come alive to us by revelation, producing truth in the inward parts (see Psalm 51:6). The Son speaks His creative word through our mouths. And substance manifests into the created realm through our bodies!

The law of co-creation is this: When your thoughts, feelings and words are in alignment (with God and with yourself), you become an unobstructed channel through which miracles can freely flow! You have always created your world with your thoughts, feelings and words, but probably did not know you were doing so. Now, as you mature, you can learn to proactively create with wisdom and intent. Yeshua prayed that it would be on earth as it is in heaven. We are created in His image and are called to paint an earthly picture of a heavenly reality. When we’re lined up with God, He inhabits and flows through us. When we are in alignment with ourselves, we become an unobstructed channel with nothing blocking His flow of miraculous life!

And to purchase on Amazon, click here: Miracles Are Normal on Amazon